When words make us look back and move forward

You are here: Home1 / News2 / When words make us look back and move forward 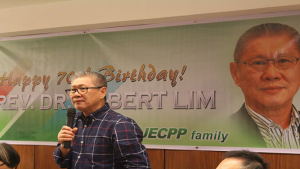 JECPP Founding Chair Rev. Dr. Robert Lim turns 70 this year, much to the joy of the JECPP family who celebrated his birthday with words of reckoning on God’s purpose in his life for the Philippines.

“We can have a vision, but we need people to fulfill that vision. Thank you for the years you stood with me,” said Pastor Lim in reply to the greetings and wishes of family, friends and co-workers who set up this birthday fellowship last April 12 in Quezon City.

God indeed gave him people who believed in the calling He placed in his heart. The first person who made him look back at JECPP’s beginnings and pushed him to move on despite the hurdles was no other than his wife Pastor Marion.

During the birthday dinner, he candidly shared a telephone conversation he had with Pastor Marion in April of 1999. Her words that day propelled a milestone for JECPP. She told him that she would raise funds enough to secure the 100 churches he dreamed for the Philippines. In November 1999, a hundred churches and more came to pass.

Pastor Lim also praised his wife for her willingness to take his place as the Senior Pastor of Evangel Family Church Singapore in 1993 so he could fully devote himself to JECPP. Moreover, her role in raising children who love and serve the Lord today is his greatest joy. “My children didn’t have an easy life. Just imagine the church is their house and the house is their church. But Pastor Marion was there for them because I was always away.”

“To wives, look at Pastor Marion as your example. To husbands, if you fail your family, you’ll also lose your ministry,” was his compelling reminder that night to fellow laborers.

The second group of people who realized the vision are the Singaporean missionaries and Filipino pastors in the city, town, and barangay churches all over the Philippines working together in discipling the nation.

A major part of the 70th birthday program was the greetings of these Filipino JECPP Core Leaders to Pastor Lim. Given a few minutes only to share from the depth of their hearts, they carefully chose words that best describe Pastor Lim’s impact on their own ministries.

Pastor Eddie Falla from the Luzon Region took note of Pastor Lim’s “integrity to family, ministry and the Lord” as an example worthy to be followed.

For his part, Pastor Bene Cabase of Central and Eastern Visayas assured Pastor Lim that his “tears for the Philippines wont’ be wasted. Philippines will be a great nation. Other nations will be in shock and awe!,” he said referring to God’s  season of having His righteousness shine in this nation for the entire world to see. “This means that the Philippines is great in His heart. Otherwise, He won’t have given us this vision”, he said.

From Northern Mindanao, Pastor Robert Padinit talked about Pastor Lim’s “balance of family and ministry. He cares for others but does not fail to give quality time to wife and children,” he said.

In Southern Mindanao region, Pastor Mivelyn Margate who shepherds the tribal churches thanked Pastor Lim for his open heart to the indigenous people of Davao City. “You built the Evangel Tribal Training Center for tribal leaders to be trained in the Gospel so that the forgotten tribal folks may experience the abundant life God promised.”

The youngest among the well-wishers was Joanna Yu, the 17 year-old daughter of Rev. Jessie Yu, who thanked her “second lolo” for paying for her tuition fees. 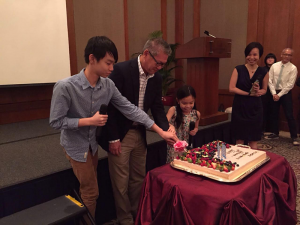 Joanna was among the many missionaries and pastors’ kids who experienced Pastor Lim’s grandfatherly affection in their growing years in the Philippines. Back home in Singapore, his two own grandchildren Joseph and Jada, whom he calls as his “greatest gift” also expressed their love to granddad in a separate 70th birthday celebration held last  March 31 at the Four Season’s Hotel in Singapore.

The dinner party was organized and attended by the Evangel Family Singapore church Pastors and staff, Board of Directors and their families, JECPP missionaries, children, and grandchildren. Joseph and Jada helped grandpa cut his cake and Pastor Marion sang a medley of her and Pastor Lim’s favorite songs “Oh, let me walk with you Jesus” and “If you know the Lord”. Daughter Dayna delivered a speech honoring her father’s role of striking a healthy balance between loving his children while giving them the space to grow and discover their uniqueness. “Our father, Reverend Doctor Robert Lim, affectionately known as Pastor Lim, has done this balancing act well,” she said.

“Most importantly, my dad has demonstrated what a life of resilience is. No doubt he is very blessed by God, but he has also gone through some hard knocks in life. There was a time when I was very worried that my dad would suffer a stroke or heart attack simply because of the heartbreaks in ministry and life. But he has shown us that God holds our lives in his hand,” Dayna said. 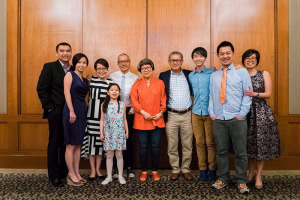 Just like the emotions that freely flowed upon hearing Dayna’s words back home in Singapore, tears and laughter were also common in the faces of his Filipino family during their own separate birthday party for him held at the Alex III, an authentic Filipino restaurant in Quezon City.

In response to the messages of the Core Leaders, Pastor Lim once again encouraged fellow pastors to endure despite deeply cut wounds JECPP may have suffered all throughout its existence in the Philippines. “During our up time, we all move forward. During our down time, we all share our pain. Some things we never understand. We have every right to be angry. But if you believe God, you have to believe that He will take care of JECPP until Jesus comes. Your part is to move on.”

Looking back, JECPP has surpassed the vision of 100 churches. There are now 554 JECPP churches planted in the Philippines.  Today, JECPP goes forward for more until Jesus comes. 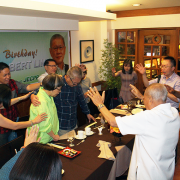 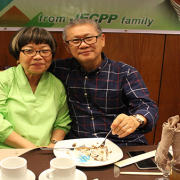 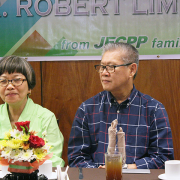 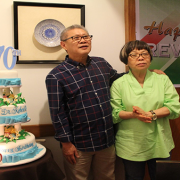 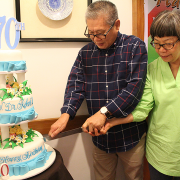 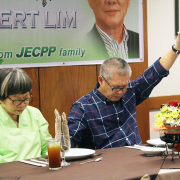 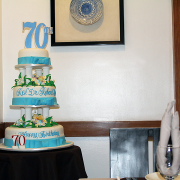 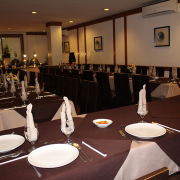 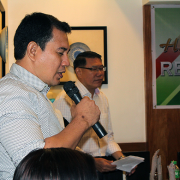 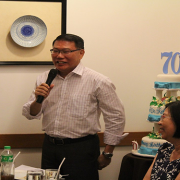 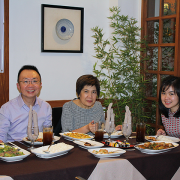 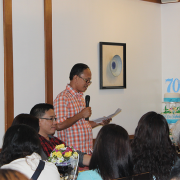 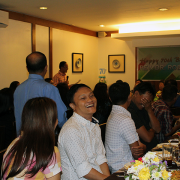 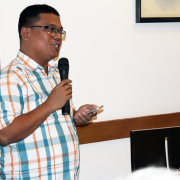 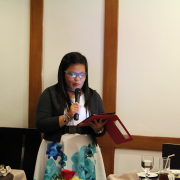 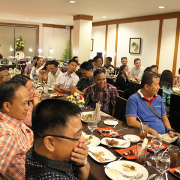 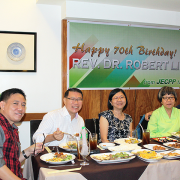 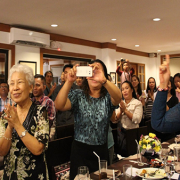 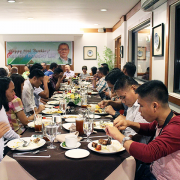 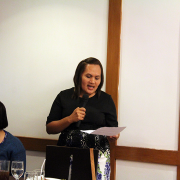