Puerto Princesa City is well known as a tourist destination in the Philippines. because of the Underground River, one of the New 7 Natural Wonders of the World, when Ptr. Ricky Tamayor and Pastor Christopher Magbanua were dispatched here, the province then was  not yet progressive. It was known for malaria and the notorious Iwahig Penal Colony. Ptr. Ricky Tamayor and Ptr. Christopher Magbanua started Sunday service on March 29, 1999, by inviting the street sweepers and some men to the place, whom they had invited for lunch for a few weeks. From this small group, they were able to start a Sunday service. 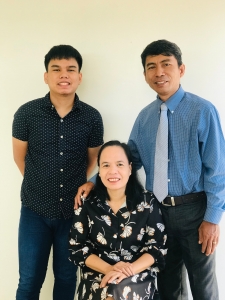 In July 2001, Pastor Ricky Tamayor and I got married, and after two years, we were blessed with a son named Hans. Despite the pleasant and unpleasant, despite the circumstances, EFC Puerto Princesa continued to exist by the grace of God. Despite the crisis, the province is thriving rather than surviving. The pandemic was an excellent reset for EFC Puerto Princesa City. The lengthy quarantine and restriction to meet face-to-face was viewed as an opportunity to relive the vision.

I will never forget what Rev. Dr. Robert Lim said: “Vision is significant in starting a church.” “Where there is no vision, the people perish; but he that keepeth the law, happy is he.” Proverbs 29:18 KJV. We planned and cascaded the same plan to the leaders from that vision. Out of that plan, I formulated a curriculum for the discipleship that God put in my heart many years ago. It allowed me to write materials and gather information during the pandemic. Materials for the curriculum had a system based on the plan, and the materials were written for discipleship, which is found in the concept of the teachings of Jesus Christ. The materials I wrote were not just for discipleship but based on my experience. That’s why I wrote them down so that others can also experience what I had.

You were born for a reason. You were significant because you carry a gift our generation needs, which is your assignment. You were unique because you were born to solve a problem, and only you can do it. You were extraordinary because you were born to make a difference. Each of us can live a stress-free life despite stressful situations. peace during trouble, opportunity amid crisis, and joy despite Pains, frustrations, and problems were simply the human being’s definition of a chance to grow. Those were some of the contents of those materials that changed my perspective on life.

During the pandemic, we started an online care group using this curriculum. It was life-changing material because those who underwent the lessons and faithfully attended the online care group testified that their perspective on life was changed. It was also the turning point for most of us. Those who faithfully participated in the care group were also excited to share it with others. As a result, we were able to start six care groups in the church.

When the restrictions were lifted, we started the four feeding centers that eventually became our house churches; they were created by the leaders who faithfully attended the online care group. Now we had a system, materials, and curriculum that were being implemented in the church and every house church here in Puerto Princesa City, and we are excited to equip the next generation. So that by 2040, we will be able to see the vision being fulfilled on the islands of Palawan. To God be the glory!