The Municipality of Manticao, Misamis Oriental is situated between Cagayan de Oro City and Iligan City. It is a place of different cultures and religious practices. Manticao has been reached out by various evangelical denominations (about 40) which explains the existence of many small churches with congregations ranging from 20 to 50 members. Most residents of Manticao rely on small-scale fishing. Many are small vendors engaged in buy and sell business.

Rev. Bismark Buendia, the senior pastor of EFC-Manticao, was a Presbyterian minister before he joined JECPP in 2007. He married a JECPP pastor, Rev. Victoria Gabe, in December 7, 2006, and they were blessed with their son Joshua.

Single and a new graduate of Evangel Missions School (EMS) then, Rev. Victoria was the one who pioneered EFC-Manticao in 2002. She used to be an overseas domestic helper in Singapore. Upon returning home, she was brought by her sister to EFC-Cagayan de Oro. Sensing the urgency of God’s call upon her life, she immediately enrolled at EMS.  After her graduation, she singlehandedly pioneered a work in Naawan, a town next to Manticao.  After a month of evangelism, prayer and fasting, God gave her eight willing families who opened their homes for Bible studies. On February 2000, they started the very first worship service attended by 13 adults and 4 children. As the members grew, the church started looking for a bigger place of worship. In time they finally settled in a nearby area situated in the town of Manticao.

Realizing her need for additional help, Pastor Victoria requested her two sisters to come over from Cagayan de Oro City. Her youngest sister, Analiza, came and assisted her every weekend for the praise and worship. In addition, her Regional Overseers also released her sister Edwina, who was then a part-time church planter in EFC-Cagayan de Oro, to help her full time in EFC-Manticao.

She praised God for her sister Edwina, who willingly gave up her hairdressing salon for the ministry. Realizing her sister’s skill, they launched out to begin a livelihood program in one of the barangays they we are reaching out to. Edwina conducted free hair-trim and manicure to the ladies in the community, and shared to them the gospel after every session. 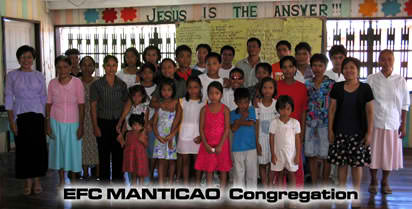 God extended the territory of EFC Manticao to the center of the nearby place called Initao. With the help of faithful EFC- Manticao youth, they saturated the different barangays in this town, conducting campus ministry for High School students. They also reached out to the disabled, such as the blind and deaf that consequently led Sis Edwina to learn sign language to clearly communicate the gospel to the deaf in this area.

As the people were motivated by the word of God, they began inviting relatives and friends, and not long after, the church started to double. The former Kagawad of this barangay also became a faithful member of EFC- Initao, Canitoan, an outstation church established in the area. To accommodate the growing congregation, Pastor Vicky challenged them to give and volunteer in the construction of a nipa- and-bamboo church. As a result, one member donated his lot, while some other members contributed in the form of money or construction materials.

Serving the Lord in church planting is challenging and rewarding.  On one occasion, the pastors visited a church member’s daughter who was suffering from high fever. She died right in front of them during their visit. While everyone was in commotion, Pastor Vicky prayed to the Lord to show His power to the unbelievers surrounding them. For about ten minutes, they continued praying and the Lord gave her instruction to breathe mouth- to- mouth to the girl. The girl recovered, and is now serving the Lord faithfully!

In 2006, Rev. Victoria was married to Rev. Bismark Buendia who officially joined the JECPP ministry in January 2007. At present, EFC-Manticao also ministers to the neighboring towns of Naawan and Lugait, with 31 outstation churches planted in those areas. Rev. Bismark and Rev. Victoria used moral recovery program (in the government offices) and feeding program as a way for the church to impact its community.

According to Pastor Bismark, not all are receptive to the gospel. Most people in their outreaches are mainly concerned with their basic needs and the education of their children. But EFC’s immersion to the community enabled them to fish those who are thirsty for spiritual things. Pastor Bismark encourages the church to be community-oriented by continuously finding ways to promote the welfare and progress of the places where God positioned His church.