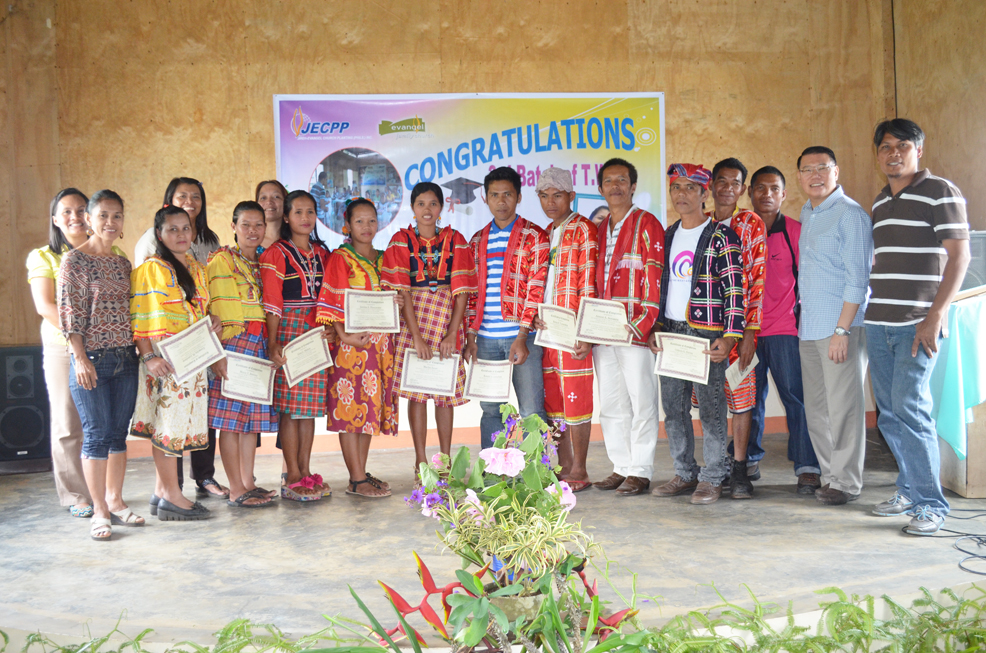 A new batch of tribal workers is now ready to set out in the mountain region of Mindanao to conserve and enhance indigenous cultures through the saving Gospel of Jesus Christ. Four men and five women compose the third batch of Tribal Workers Intensive Training (TWIT) which culminated last August 30, 2014 at JECPP Evangel Tribal Training Center (ETTC) in Arakan Valley, North Cotabato.

JECPP has partnered with the Tribal Missions Foundation International (TMFI) in the mandate of salvation to all nations. “Language, territory and culture constitute a nation. Tribal communities posses all three, and therefore, the ethnic culture is a focal part of this redemptive plan of God,” says Sherelle Cotecson, Program Manager for Culture and Development of TMFI.

In his welcome address to the graduates and guests, Southern Mindanao Regional Director, Rev. Peter Wee, announced that the Tribal Ministry which started in Mindanao has now extended to “the Ifugaos” in Banawe and “the Mangyans” in Mindoro. Through the efforts of Rev. Jessie Yu, Regional Director of Luzon, JECPP tribal churches have already been planted in these places. Pastor Wee also shared his desire of a coming together of all JECPP indigenous churches all over the Philippines for a convention.

The church can be a holistic tool for culture development.  One of the graduates, Bernie Tumanding, son of a Tinananon tribe Datu (chieftain) believes that the church can effectively promote this advocacy more than other organizations. He observed that though many NGO’s come to their places to promote the welfare of the tribes, they could cause division instead.

Sister Sherelle explained that due to the different advocacies of NGOs, prejudice or bias can be directed at specific groups of people. “This practice works against the integrated nature of the indigenous culture,” she said.

On the other hand, Bernie believes that a “development-focused and culturally-sensitive” church has the power to preserve and unite the ethnic society. Eager to impart his training, he wants to teach literacy to his folks at Sitio Pundok. He particularly observes that during election, some tribal people can be tricked into voting someone simply because they cannot read and write. 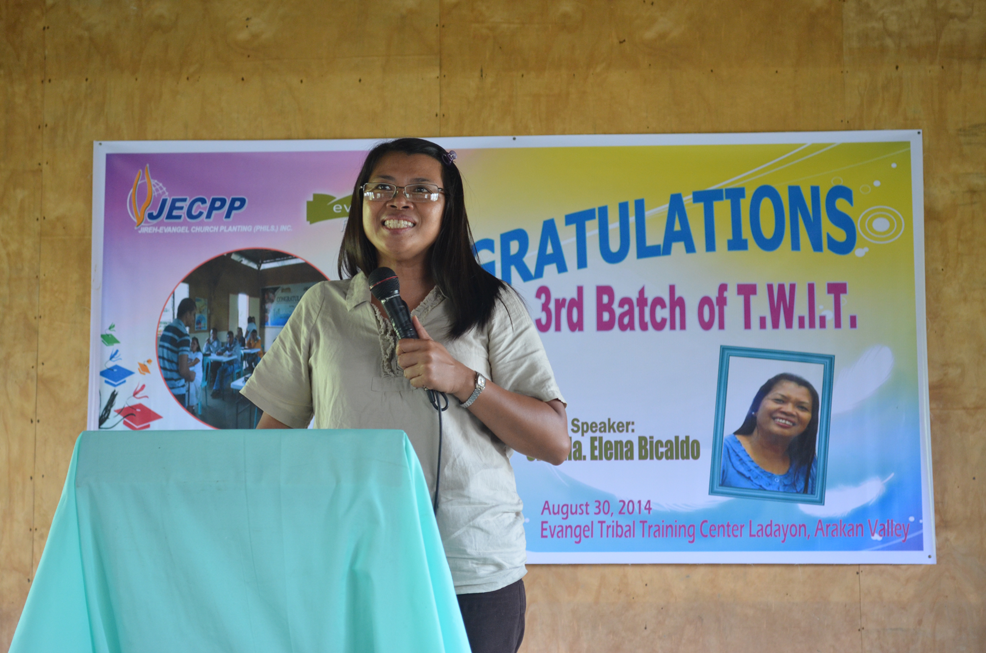 TWIT graduates are expected to impart their knowledge and skill to their Bible study groups and discipleship outreaches.  “More than half of our trainers now are from our first batch of graduates,” says TMFI Managing Director Ma. Elena “Beng” Bicaldo, who was the Speaker in TWIT’s 3rd Graduation ceremony.  Sister Beng reminded the graduates that the end of their missions training is only the beginning of a miraculous journey with Jesus. She quoted Mark 6:45-51 where the faithful disciples encountered amazing miracles as they obeyed God’s call through impossible situations and problems.

What hindrance did the disciples face? One hindrance was their being physically and emotionally drained.  Sister Beng pointed out that after a tiring day of ministering to a big crowd, Jesus instructed them to immediately cross the sea instead of resting.  Since the waves were strong, they strained rowing all night. They felt very afraid and alone in the middle of a cold, dark sea. Jesus did not go with them because as they crossed the sea, he departed to the mountain to pray.

What is your response when you reach this difficult point?  Sister Beng encouraged the graduates to wait on Jesus who promises to give rest for the weary. When the disciples could have thought that Jesus had abandoned them, He had not. He was actually praying for them, as He is continually doing for us today.

The 6th chapter of Mark reminds us about knowing God by obeying Him even if we do not understand His ways. Jesus commanded the disciples to feed five thousand when they themselves had nothing to eat. They also wondered about the “ghost” who walked on the water towards their boat. Sister Beng said that as long as we are here on earth, we will always be disciples so we do not stop learning and knowing Him. This is why God said we can ask of Him for wisdom in our lack.

Among the nine graduates, two were from the One-Way Outreach denomination who joined this year’s training. Wearing their colorful ethnic attire, the graduates gave a spectacular dance and song numbers in Obo Manobo language. They also gave their testimonies and much appreciation for the training. A very sumptuous and delicious lunch prepared by the volunteers follow the closing of the graduation ceremony.