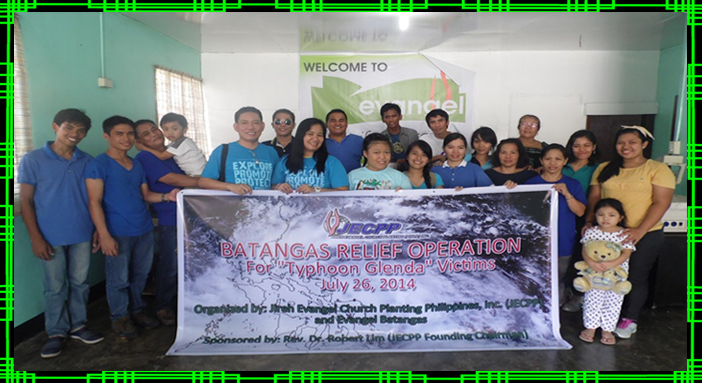 It was July 14, 2014 when PAGASA announced that there is a super typhoon named “Glenda” coming to the southern part of Luzon. On the next day, PAGASA announced that Super Typhoon Glenda hit the the CALABARZON region, where Batangas belongs. Because of the strong winds and heavy rains, many houses were destroyed and thousands of families were affected. Even the Evangel Family Church Padre Garcia was damaged.

On July 17, I immediately informed the disheartening condition of the EFC Padre Garcia to the Regional Director of Luzon Region, Rev. Jessie B. Yu. After a couple of hours, Rev. Jessie called to tell me that Dr. Robert Lim, Founding Chairman of JECCP,wants to extend help to 200 affected families in the community where Evangel Family Church Padre Garcia is located. Pastor Jessie scheduled the date of relief operations on July 26.

On July 26, many lives were touched and embraced by the love of the Lord through this activity. One of them was a lady who cried upon receiving the pack of rice and groceries. After she received her relief goods, she came back and through tears, repeatedly gave thanks to the church.

Because of what the Lord did through JECPP, many hearts opened to receive the Gospel. Some people became willing to open Bible studies in their houses. Thanks be to God! On the next day after the relief operations, which was Sunday, new ones came to the church and attended the worship service.

After few days of relief operations, the barangay officials appreciated the effort of EFC in the community. Also, the municipal mayor, together with the councilors of Padre Garcia gave us a plaque of appreciation for what we did in the community. It was the first time that a church extends help to the people affected by the calamity in the area. We believe that through this event, we could easily spread the Gospel in this area to fulfill the mission of Christ of bringing unbelievers back to God.

Thank You God for Saving Me
Scroll to top