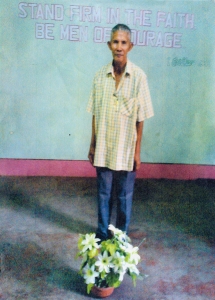 Sometime in 1992, two missionaries, Pastor Benjamin Chaves and Bro. Nelson Gailo of Evangel Family Church Ajuy, Iloilo, were passionately sharing the Word of God in one of their Cell Groups  in  Brgy. Progreso, Ajuy.  While they were sharing the gospel, they noticed a man who was attentively listening.  After the preaching, they challenged the listeners to surrender their lives to God and receive Jesus Christ as their Lord and Personal Savior.  Right at that moment, the man dropped on his knees and desperately cried out to God for forgiveness without hesitation.  He accepted the message of salvation and surrendered his life to God.   After the fellowship, Pastor Benjie and Bro. Nelson excitedly asked who he is, he answered Carling Flores.

Bro. Carling engaged in STL (small town lottery) corridor before he was saved. He lived in a mountainous barangay next to Brgy. Progreso called Badjangan as a transient for 10 years. He was known to be friendly  and kind person.  Considering that he was not a native in the place, still he had many friends.

These friends noticed a big change in him after he got saved.  According to them, he was once a gambler and a drunkard and did many things that are not pleasing in the eyes of God. However, when he offered his life as a living sacrifice to God, everything about him totally changed.  He became an active and passionate soul winner and a faithful member of Evangel Family Church Ajuy, Iloilo. He used to walk for 2 hours from the mountain where he lived to the town of Ajuy  to attend church service. It was a joy for him to worship God and to fellowship with his brethren in the Lord. Not too long after his conversion, Bro. Carling became spiritually matured and became more committed to the work of God.

In September of 1993, when Pastor Benjamin and his wife Pastor Lina Chavez became the Senior Pastors of EFC- Ajuy, they asked Bro. Carling if he wanted  to be a utility personnel of the church and offered that he can stay in the building.  Bro. Carling gladly accepted the offer. He did his responsibilities diligently and served with all of his heart. The members loved him and were inspired and blessed by his life.  Despite of his lack of education, he never felt inferior to anyone.  Instead, he was always eager to teach the word of God and was full of zeal. He had a burning passion to win souls for Jesus, and had a gift of healing as well. Once, he prayed over a deaf young man, and the man suddenly heard clearly after the prayer.

Like most servants of God, he encountered testing and trials. One time while he was sharing the Word of God, a man got mad at him and tried to kill him. He was shot many times but the bullets fell to the ground instead. The man was so stunned that he ran away while Bro. Carling was praising God for protecting him and saving his life. His testimony brought more souls into the Kingdom of God.

Notwithstanding, there was a nagging pain inside of him.  He longed to see his family, especially his son. He had no communication with them for 18 years.  Pastor Chavez looked for ways for him to be reunited with his family in Antique.  Even though EFC members missed him, they were comforted with the knowledge that finally  Bro. Carling will be with his own family.

Upon reaching his hometown in Antique, Bro. Carling did not waste his time, he continued to share his testimony to his family and relatives, he was unstoppable in his passion to save the lost for Christ and served God faithfully through JECPP. Sometime in 1994, he and  Ptr. Franklin Margomaas  were assigned in EFC-Cubay, Libertad Antique to handle the outstation church there,  after which  Bro. Carling was transferred to EFC- Lindero, Libertad, Antique to personally handle the newly opened outstation.

While he was doing his usual ministry of preaching and sharing the Word of God in Lindero, someone wanted to abort the ministry by putting poison in his beverage, it caused his immune system to weaken and deteriorated his health, especially his nervous system. In spite of this, Bro. Carling continued the work God had called him to do, he believed that God will sustain him, he did not allow the illness to hinder the work of God rather he became more courageous and relentless to reach out for more souls for the Kingdom of God.

He spent 18 years in God’s ministry in EFC-Libertad, Antique, there was not a day that he did not share the Word of God. Until he was transferred to EFC- Nauring, Pandan, Antique in June of 2013, under the leadership of Pastor Franklin Margoma where he continued his evangelism ministry, house to house visit and bible studies.

He stayed in Pandan, Antique for 4 years until he arrived at a good old age.  During the course of time, his health weaken and eventually he was not able to walk and was immobilized for weeks. Until God called him in His presence at the ripe age of 74, he lived a fulfilled and productive life.

Like what Apostle Paul said in 2 Timothy 4:7 “I have fought a good fight of faith, I have finished the race, I have kept the faith”.

Bro. Carling life’s journey serves as a great example of strength, commitment and passion.  He was faithful to God until the end of his life.