A victorious Concert for Jesus 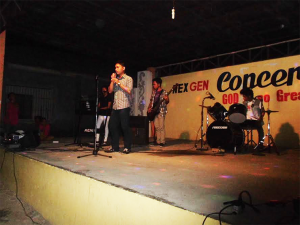 It was not just a concert; it’s all about Jesus that we were campaigning when we held the two one-night “NEXGEN Concert: God is so great” in Tinigbas, Libertad, Antique last May 4 and in Guinbangaan, Laua-an, Antique last May 19.

Holding the banner which Romans 8:37 tells: “We are more than conquerors,” we walked and believed that we would triumph with Him through His music.

We prepared ourselves for the battle not only by practicing the music line-ups but also feeding our spiritual life by ceaseless praying, sharing and encouraging each other, reaching out to children, and opening cell groups to various barangays and barrios.

The most awaited day arrived – the day that He was about to stir up and move into the hearts of the people.

EFC – Iloilo City and EFC – Sta. Barbara joined with us for His works. Everyone gave their best in playing God’s melody and showing Christ unconditional and everlasting love to the people through drama. 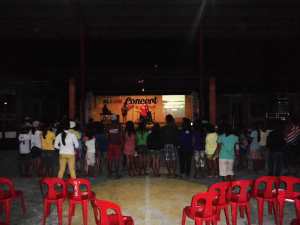 Many people attended the concert and many responded. God is truly great! He never fails. Children pranced and danced, so did the youth. The God-inspired music broke the chains that have been binding the place. The people witnessed how big and great our God is.

Because of the success we had during the concert, we rewarded ourselves. We, along with the concert facilitators, went to Malumpati in Pandan, Antique and savoured the pristine and icy water of the spring. Not only had we filled our eyes with the beautiful scenic spots but also our external storage because we took a lot of photos.

Self-defense and crafts for EFC-Davao kids
Scroll to top