The culmination night of the JECPP National Church Planting Convention brought out the blending of Asian voices in one chord of praise to the Almighty Father who loves all nations. More than 350 Filipino and Chinese delegates and Singaporean missionaries converged at the Cebu Parklane International Hotel, Cebu City in a phenomenal fellowship. The worship service opened with a warm gracious Filipino welcome, led by JECPP Chairman Rev. Peter Wee, to the smiling Chinese brothers and sisters.

On this convention’s final night, the transport crisis the JECPP delegates endured, the hotel disservice the Chinese ministers had to go through, and even the territorial row between these two nations were no big deal. Only the tender love of Jesus prevailed as the worship team led a mélange of English and Chinese songs.  In gratitude, plaques of appreciation were given to the convention speakers Rev. Dale Lim and Rev. Dave Gibbons. And in behalf of all the spiritual leaders and the church planters, a tribute to honour our founding chairman, Rev. Dr. Robert Lim and his wife, Rev. Dr. Marion Lim, a plaque of appreciation was given together with a generous love offering which he gave back to JECPP to help in the furtherance of God’s work.

“Other nations boast of weapons of mass destruction, but you have the most powerful weapon of love” said Rev. Dave Gibbons, JECPP’s convention speaker, to the body of Christ. Pastor Dave who is of Korean descent is the founding pastor of New Song Church in Los Angeles, USA. Pastor David’s message was interpreted in Chinese by Pastor Casey Chan from EFC-Singapore.

The June 4 to 7, 2013 convention also marked JECPP’s 20th anniversary. It was simultaneous with the Chinese ministerial leadership training, also supported by EFC-Singapore. The Chinese conference was held in an adjacent hotel, and in the last service on June 6, the Chinese ministers, headed by Rev. Marion Lim, joined the JECPP pastors.  It was an exceptional night of unity and encouragement.

In a letter by Pastor Marion to Pastor Wee right after the convention, she expressed the Chinese’ delight and excitement to have met face to face with their Filipino co-servants of the Lord Jesus Christ. 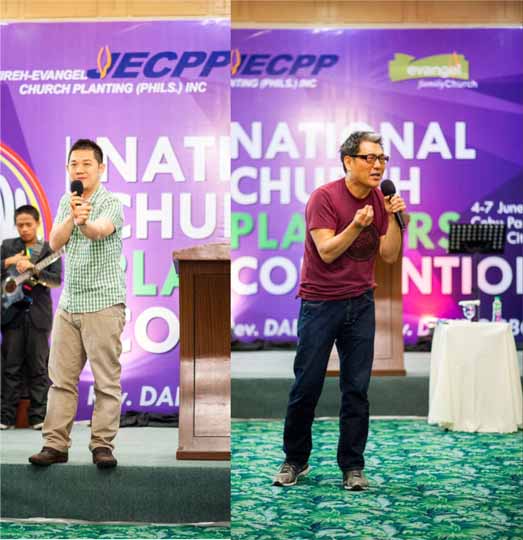 The two guest speakers, Rev. Dave Gibbons and Rev. Dale Lim, lead pastor of EFC-Singapore, challenged the pastors to “re-imagine”their ministries through the creativity of the Holy Spirit (see related stories). “Our traditional way of doing church was thrown off the window”, said Pastor Wee, referring to the fresh direction of the Holy Spirit to the JECPP communities in the Philippines, as emphasized by the speakers .

God’s will triumphed over mishaps

Early this year, JECPP started preparing for this rare international event, with EFC-Davao in-charge of convention materials and EFC-Cebu taking care of the logistics. Despite the hard work of church staff, the convention was rattled with a major crisis, not only felt by JECPP but by the whole Davao City which was the take-off point of the 42 travelling delegates from Southern Mindanao region.

On a rainy Sunday evening last June 2, an aircraft skidded off the runway during landing at the Davao Francisco Bangoy International Airport which led to a two-day airport closure.  According to news reports, the incident paralyzed the airport operations of at least 20 flights per day that accommodate more than 4,000 domestic passengers alone.  Moreover, Davao City lost an estimated P250 million income, according to news sources.

Though there were no casualties among passengers aboard the plane which blocked the runway for 48 hours after the accident, about 20 of those passengers were reportedly treated due to  hypertension.

But tension also ran very high among the JECPP leaders who were already in Cebu anxiously waiting for their teams to arrive. The Southern Mindanao group booked on different flights from June 3 to 4 had to travel to General Santos City’s domestic airport, three hours by bus from Davao City, hoping to catch other flights to Cebu.

Re-bookings, prolonged delays, security risks and lost baggage were just some challenges encountered on the arrival day of the convention, not only by the Southern Mindanao team but also by the Luzon and Visayas participants, considering the domino effect of the airport crisis. Participants arrived late, hungry and some sick and nauseous from travel.

But on the eve of the convention, the tired travellers were quickly nourished with a sumptuous dinner and an uplifting message by Pastor Dale. With God’s covering mercy, all pastors and staff arrived at Cebu City on June 4, never missing out on what God has for them in this spiritual retreat.On the other hand, the Chinese conference concurrently held in a separate venue, also put up with accommodation mishaps. One of its sessions was even called off because its booked venue was mistakenly given to another hotel client.

But the three-day JECPP retreat was still truly a treat as ministers relished timely messages in the mornings, rested, relaxed and shopped for ‘pasalubong’ in the afternoons and enjoyed praise and worship in the evenings.

“God’s will still prevailed,” observed Pastor Judith Kintanar of EFC- Davao. “The convention turned out to what it’s meant to be. No more walls among us”, she said.

On the last night, the worship service ended with sweet goodbyes and frenzied picture-taking among elated JECPP leaders and pastors.

“There is more openness and camaraderie now compared to the past,” noted Pastor William Consular from EFC-Panabo.

The event also saw the appointment of a Regional Director for the Western Visayas in the person of Rev. Benjamin Chavez. The JECPP spiritual leaders ordained Pastor Benjamin and his wife Pastor Lina who have served EFC-Ajoy for 21 years since their graduation at ECME. They have a 16- year-old son named Bl John and 11-year-old daughter Kezia.

Pastor Benjamin is the second Filipino who has joined the original Singaporean team of JECPP spiritual leaders. Another Filipino, Rev. Jessie Yu, was ordained Regional Director for Luzon last year.

Pastor Benjamin said his main concern as the new Regional Director is the unity, healing and restoration of the 215 EFC churches in Western Visayas. In the past year, JECPP experienced its most tumultuous crisis so far which rocked the organization, especially the Western Visayas leg.