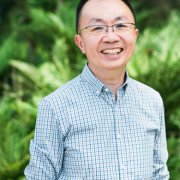 Pastor Andrew began his ministry in the pioneering of Evangel Family Church, Iloilo City in 1986 as an Assistant Pastor. By 1988-1992, he went on to pioneer Evangel Family Church, Cebu City. As the organization progressed to raising local leadership, he was offered the role as Principal of JECPP’s Bible-training school, Evangel Missions School from 1992-1994. Then on December 31, 1994, Pastor Andrew and his family were led by the Lord to pioneer another new work in Evangel Family Church, Cagayan de Oro City.  Together with his wife, Rowena, they are still presently the pastors of the church in Cagayan de Oro City and overseeing the churches in the 6 sections of Northern Mindanao. Their only daughter, Kristy, is currently pursuing her post-graduate studies in medical research.