The 7.2 magnitude quake tagged as the 5th deadliest earthquake in the Philippines since the 16th century struck the entire Visayas region and as far as Masbate Island in the north and Cotabato provinces in Southern Mindanao on October 15, 2013.

A series of aftershocks, expected to last for months continued its assault on victims and survivors. One week after the quake, PHILVOLCS (Philippine Institute of Volcanology and Seismology) has recorded more than 2, 000 aftershocks; 57 of which were felt.

The experience of an aftershock, however, is more than just the physical tremor. Fear, panic, trauma, depression and grief for lost loved ones are worse emotional aftermath.

In response to the plight of earthquake victims in Bohol, the 682 JECPP Churches all over the Philippines wasted no time to help. One day after the quake, Pastor Chuck Chua and Pastor Jay Bautista of EFC-Cebu met with Pastor Bene Cabase of EFC-Bohol to survey the destruction. They selected the five most affected towns, namely, Cortes, Antequera, Loon, Maribojoc and Sagbayan ( the epicenter town) for the first Bohol Relief Operation on October 21, one week after the disaster. Packs of goods were distributed by JECPP volunteers to 500 families. This was followed by the second relief operation on October 29 which helped another 500 families.

Blessing one thousand families (multiply by 5 for an average size Filipino family) would mean that together, we were able to bring a smile to at least 5,000 Boholanos. This number of time bless is certainly higher than the number of aftershocks they may still be experiencing!

On October 19, JECPP posted a video (http://www.youtube.com/watch?v=rXXF1XMz4LA) to appeal to JECPP churches to lend a hand to fellow countrymen. One can have a glimpse here of the devastation of the earthquake in Central Visayas.

According to news reports, 198 were dead with 185 of them in Bohol, the epicenter. Rappler.com reported 53 thousand damaged structures; most notable were the national historical churches in Bohol and Cebu. 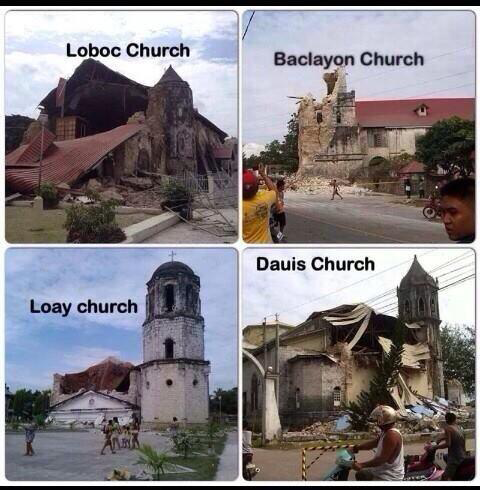 The first JECPP Bohol Relief Operation is a combined effort of 24 volunteers from EFC-Cebu and EFC-Bohol. It was done in two separate routes; one by land for Cortes, Antequera and Sagbayan and the other by sea to reach Loon and Maribojoc. God’s touch caused each team member to be courageous enough to leave home in spite of themselves and their families experiencing turmoil caused by the quake and ongoing aftershocks.

The preparation of 500 relief goods was quite a challenge for Pastor Bene Cabase’s team, with only one shopping mall opened for the entire city of Tagbilaran, Bohol. He and his wife Pastor Leah had to plan thoroughly the transportation goods considering the destroyed roads and bridges.

As prayers were poured out on the day of the relief operation, there was an impending super typhoon of 200 kph threatening to enter the Philippines. There was a downpour and strong wind early that morning. One of the vehicles for the relief operation broke down. Prayers were urged again from the different JECPP churches, and God be praised as the two teams told their stories on that one wonderful day:

The bad weather delayed us. On the previous night, one sailing boat capsized in the same route we were about to go. Pastor Chuck advised us to wait at Tagbilaran Manga Fishport while he asked prayers from the different JECPP Churches. The sun came shining out not long after. Our team of volunteers and some Boholano friends loaded the relief goods into motorized banca- a small wooden fishing boat. Seven banca were used by the team to carry all supplies. It’s risky to sail on a small banca that could seat only a maximum of 3. But we believed that our God is able to keep us safe. Half an hour later, we reached Maribojoc and saw the collapsed houses and electric posts by the seashore.

We noticed that mainly the men were queuing to receive the relief goods for 100 families. We learned that they evacuated their wives and children to safer and higher area away from the landslide. They were gripped with fear, so they chose to stay in their secure place while the men looked for food and water. The giving of the goods was so orderly that we were actually surprised and impressed. They were gentle and grateful people.

The next town was Song-on, Loon where we saw the mountains fell with the devastations seen in the lowland. While other islands in Bohol were reportedly sinking, Loon town was experiencing a phenomenal land elevation; thus, their seashore was moved about 600 meters away exposing the precious corals. As we started the distribution, we were overwhelmed with joy seeing the recipients display the spirit of bayanihan (comradeship) as they passed the goods from one person to the next while standing on the fragile corals. Their “thank you’s” were unending. We could only be grateful to God and to the people who contributed to help the 100 families there.

For the other three towns, we went by an open truck filled with 300 relief goods. The smaller vehicle designated to carry the rest of the volunteers broke down because of the unpaved, muddy road, so all the volunteers squeezed into the open truck.

The first town we went to was Loreto, Cortes whose people braved to go to our meeting place despite the bad weather and long walking distance. Sister Gina of EFC-Cortes gathered the people in an open field by the woods. The waiting crowd was so overjoyed to see us. We saw the smiles of relief and sincere “thank you’s” from their lips.

When we reached the town of Antequera, we did not only distributed the goods but lent our listening ears to the stories of the victims. Some lost their loved ones especially in the landslides, while some had amazing stories how they fortunately escaped from their collapsing houses. We thank God for the opportunity that we could pray with them. Truly in this operation, we had more than just the 500 relief goods. We had the unending supply of God’s joy, love and peace in Christ!

Sagbayan was almost two hours farther from Antequera. Traveling there, we saw the placards and children along the road requesting for water, food and PRAYERS. The sights moved the volunteers deeply. The famous Chocolate Hills were not all intact as some were ruined by the quake. We saw more destroyed houses as we keep on our journey. Experts said that 90% of these homes are considered unsafe for living. My ancestral home which I had not seen for 24 years was not spared.  My cousin who was our contact person in the town showed me how she escaped in that house. Finally, the distribution of the goods was so touching upon seeing their very appreciative eyes and the sweet Boholano smiles.

That relief operation concluded with testimonies at the new and better sanctuary of EFC- Tagbilaran as their previous place had major damages, including the almost half-split steel gate. Pastor Bene gave thanks to God for the protection of his family and church members. He also expressed his deep gratitude to all the JECPP churches and leadership, especially to Pastor Robert Lim and the Regional Leaders for the generous help to the Boholanos to whom he has been a missionary for almost two decades. The youth of EFC-Tagbilaran testified with tears of joy that the Lord used them to help their fellow Boholanos, thanked God for no casualty especially among their loved ones, repented from spiritual lukewarmness. As we worshipped the Lord on that thanksgiving night, there was still the insatiable cry in our hearts to do more for the people there.  Our surprise came when Pastor Chuck announced to the the entire Bohol Relief Operation team the overwhelming response of the JECPP Churches. Thus, a second relief operation to bless another 500 families was about to happen!

(An account of Pastor Bene Cabase on the 2nd Bohol Relief Operation, October 29, 2013)

A day after the first relief operation, I had to admit my wife Pastor Leah to a hospital as she experienced some sort of food poisoning. She collapsed while in the comfort room. Thanks be to God that she had a speedy recovery then. We spent the week planning how  to go back to Maribojoc and Loon. Daily news reported that some have already died of hunger in those towns.

The young people and the adult in church worked hand in hand to pack the 500 relief goods after our Sunday Service up to almost midnight. Nineteen volunteers were willing to go with me through the seas to bring the relief goods. We decided not to bring the team through the small ‘banca’ anymore as advised by Pastor Chuck as the risk was pretty much higher. I couldn’t find a boat that could accommodate the 500 relief goods and 19 volunteers as there were no commercial fishing boats in Tagbilaran. However, God directed us to another island, and there we found a big diving boat in Panglao!

Tuesday early morning that week we sailed together to Maribojoc, specifically to the people in Brgy. San Vicente. The mangroves in this barangay were quite thick that we took some time locating the seashore. Thelma, our contact person, met us with a group of fishermen in their small banca right on time. Ten of us volunteers went in the small banca as the fishermen brought us to the seashore. Reaching the shore we saw the numerous families waiting for our arrival, a very touching sight. We lent our listening ears to the stories of each individual. Some stories were amazing escape from death while some were painful losses of their loved ones and friends. They were filled with thankfulness for the help. We thank God that we could be there for them even for such a time!

We sailed then to Basdaco, Loon, but this time the island was noted to have experienced continuous changes in its landscape. The exposed corals had become further from the seashore compared to the previous week during our first relief operation. I thought of asking again for a small banca to help transport our goods and volunteers over where the people were. Unfortunately, no banca could be provided this time. Carrying the goods to the shore line would not be possible because of their weight, and stepping on the fragile corals would mean we might injure our feet. So I instructed all the recipients to form a long line from the seashore to our diving boat and pass the goods one to another. With the helping hands of the Boholanos themselves, we finished giving them the hundreds of remaining packs. They waved a big thank you to the volunteers as we went back to Tagbilaran. It was a very heartwarming sight.

It is the greatest joy of a victim of any calamity to know that someone cares for them. We are glad that our dear Lord Jesus Christ uses His church to respond to the cry of the needy, homeless and grieving.