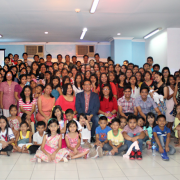 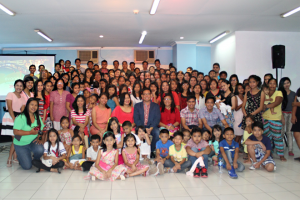 Smile! Aside from the goodness and grace of the Lord, these people also make what Evangel Family Church Quezon City is today.

The end of May ceremoniously marked another beginning chapter for the Evangel Family Church (EFC) Quezon City as its leaders and members held their 3rd founding anniversary at the 6th floor of Marian Medical Arts Building.

May 31st might seem an ordinary day to others but not to Rev. Jessie Yu, Regional Director of EFC Luzon Region.

He considered this day as one of the breakthroughs made by Jireh-Evangel Church Planting Philippines (JECPP) as he blazed a trail of putting up the first Evangel Church in the National Capital Region (NCR).

Armed with the vision of stretching the wings of JECPP in reaching out those who are in dire need of the Word of God and hope through Jesus Christ, he, together with his family and ECME students, swooped to Luzon and found his nest at 27 Buick St. Fairview Quezon City where he conducted the first service last May 27, 2012 with 16 people ready to listen.

Three years has already passed, and the church has built its roots.

Homes have been visited.

Several approaches to evangelism have been tested.

Many were reached out and water baptized.

Community services have been rendered.

And as the saying goes, “The rest is history.”

The church has proven its growth in numbers and has shown development through the lives of each member who voluntarily serves to disciple others.

“For three years, we have visited and did evangelism with a lot of homes and families and even coordinated with the Barangay Captains and Councilors for community projects,” said Pastor Jessie. 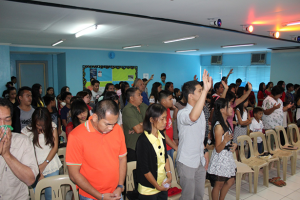 Praise and Worship Him! The church members start the anniversary by lifting their voices up and bowing their heads low.

“As a result, a number of people and families regularly attend the church from the surrounding community, not counting those from other cities within Metro Manila,” he added.

Celebrating its 3rd founding anniversary, the church was jam-packed with around 148 people to share in the momentous event.

Asked on the theme of the Sunday message which zeroed in on “Give Praise to the Lord”, Pastor Jessie explained why we need to, “Simply because we have seen how God has showed His grace and goodness to the church. He has given us more than a hundred people including children that attend every week plus the new place He has opened for us at a reasonable rate.”

“There are three significant events that happened in EFC-QC for the last three years: the numerous ‘Blessing the Community’ we have done to various barangays especially if there’s flood in the Metro, the visit of Rev. Dr. Robert Lim and Rev. Dr. Marion Lim during our Missions Sunday last September 28, 2014, and our moving to the new location now at the Marian Medical Arts Building on February 2015,” he narrated. 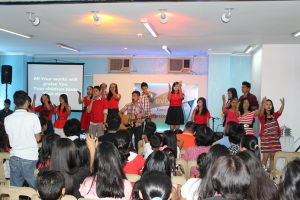 Give Praise to the Lord! Don in red, these young people render a special number that extols the goodness of God.

During the service, seven members were given the privilege to speak on “Evangel Quezon City and Me”.

“The main point of those testimonies was how the church made an impact on those selected people,” Pastor Jessie said.

“I found a niche here. I considered the church as my second home,” Bro. Alvin Jungco testified.

The fifteen-year-old Mark Quiambao confessed that he “used to wonder why the house across their home was throwing a party every Sunday because he found it noisy”. Nevertheless, when he was reached out and started to believe, he considered the church as agent of change in his life – from a timid and silent type of teen to an outgoing and talkative lad.

Bro. Nelson Acedera thanked his daughter for inviting him to church. He considered the church as source of moral support, encouragement and transformation for his family. 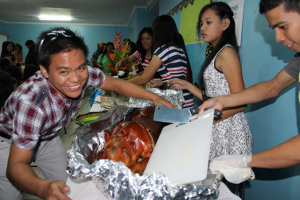 Through the concerted effort of the members and leaders, several dishes were shared after the service.

Meet and greet took place as members from different community discipleship groups  and cell churches in Veterans, Caloocan, and Taytay, Rizal were able to attend the celebration.

“The Grace and Goodness of God alone make Evangel Family Church-Quezon City what it is today”. 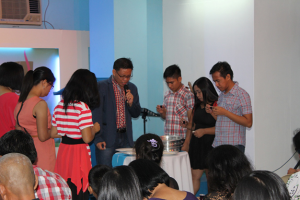 Take My body. Ptr. Jessie Yu, together with Ptr. Rachel Yu and the leadership team, leads the communion.

And for the years to come, Pastor Jessie said that EFC-QC will continue to “reach more souls and families; raise and disciple more leaders; plant more cell churches; send more missionaries in other parts of Luzon provinces; and plan for a much bigger place of worship as the Lord leads and provides.”

At the end of the day, he thanked God for sending good people to the church and for His provisions. He was also delighted seeing the people get to know God and grow in their love, faith, knowledge and service to God.

“I feel very fulfilled inside but I know there are more wonderful things and events to come and lives to be touched by God,” he added.

Surely, Evangel Quezon City is yet to tell more stories as the church has opened another chapter for new endeavors.

All praises and glory be to God alone!