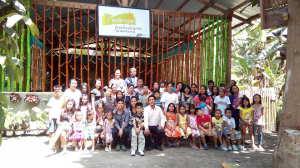 It’s been 5 years since Pastor Willy and Pastora Rosemin Pontillas set their hearts and ears to God’s prompting for the Hiligaynon-speaking people in the south of Mindanao. In 2012, the couple met with their JECPP Southern Mindanao Regional Directors Rev. Peter and Christine Wee to discuss the possibility of planting another Evangel Family Church in the heart of South Cotabato. That meeting ushered the first Sunday fellowship of the pioneering EFC-Koronadal at AGREDA Village, Bo. 1 Koronadal, South Cotabato.

EFC- Koronadal easily adapted to the culture of the people. The church took care of the responsive community and gained more than 20 families from the neighborhood. Cell churches in the nearby barangays like Cacub, Magsaysay and Kaunlaran were also opened. Pastor Willy and Pastora Rosemin believe that being able to speak Hiligaynon wholeheartedly is very effective and necessary for God-and-people-centered missions.

After a year, they needed to transfer to a more spacious place in Sto. Nino Bo. 1 to accommodate a growing congregation.  From then on, God gave them the vision to acquire their own church lot and building. They shared that vision to the flock, and together they knocked heaven’s door for the Lord’s promised provision to His people. He granted their petition without delay. They were able to purchase a piece of land in an easy three- year installment plan.  The place is just few kilometres away from where they were renting.  With a leap of faith, they constructed the church building with the help and assistance of JECPP, Rev. Dr. Robert Lim and EFC- Davao.  Amidst the trials and challenges, the church was built on solid foundation, not just on the physical materials, but more so on the solid faith of the whole EFC-Koronadal. Together they contributed their time, ability and resources in building such a beautiful church.  The cell church in Cacub provided almost 90% of native materials such as bamboo and bagakay to adorn the church windows. Truly God is Amazing!

On the third Sunday of July this year, EFC-Koronadal was all set for its 5th year anniversary of fruitful ministry. The celebration started with a doxology given by the Kids’ Ministry followed by powerful testimonies of God’s healing. Church member Gerlie Magluyan testified how God healed her through a dream. The doctor gave her four days to live after undergoing a caesarean operation which complicated to collapsed kidney. While in the hospital bed, she dreamed that she went to a very dark place. Then she saw feet in sandals which illumined the spot. When she woke up, she wept trembling with God’s revelation and complete healing that took place right there. One youth leader named Arthunilo Avenido talked about God’s protection during the church construction. He was in tears testifying how the Lord spared his life from what could be a fatal accident when a large durian trunk fell and hit the newly built wooden church. He was inside the church when the tree crashed. He said the incident happened in a blink of the eye, but he was amazed with God’s very timely rescue, and the church repair was also done in no time.

The celebration soared high as the congregation began the praise and worship led by Anton Pontillas, the oldest son of Pastor Willy and Pastora Rosemin. God poured out His presence as they were worshiping and approaching the throne of God with a minimal musical instrument! How lovely it was to hear the voices of the children and adult singing from their hearts.

Pastor Christine Wee was the guest speaker who challenged the congregation to “show up, listen up and speak up” their conviction and faith to encourage each other. Afterwards came the Dedication of the church lot and building by Pastor Peter Wee who declared that the whole area is for the glory of God.

The festival ended with a community banquet where everyone was welcome to join the boodle fight. Three long tables were prepared with rice, savory dishes, fruits and more, served in banana leaves for everyone to share. The whole event was a manifestation of God’s sovereign power that is at work no matter what the situation is. He is truly amazing! 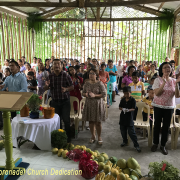 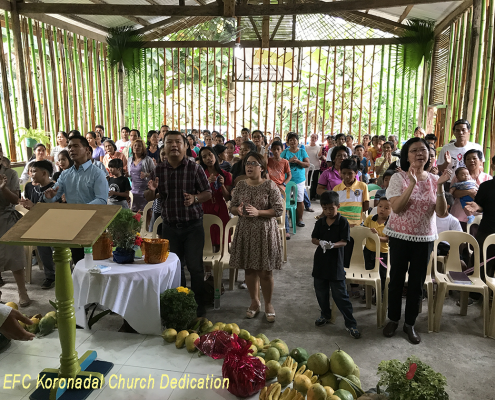 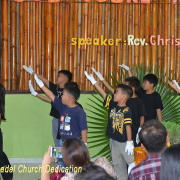 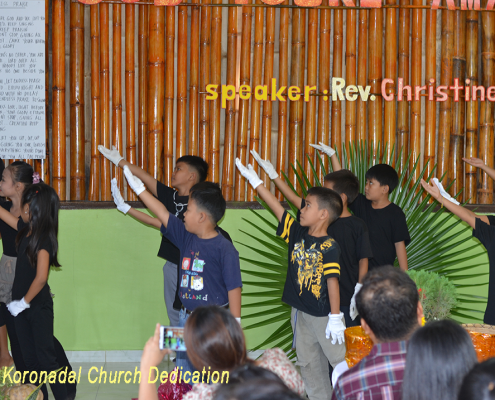 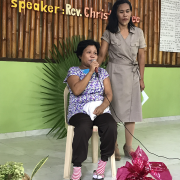 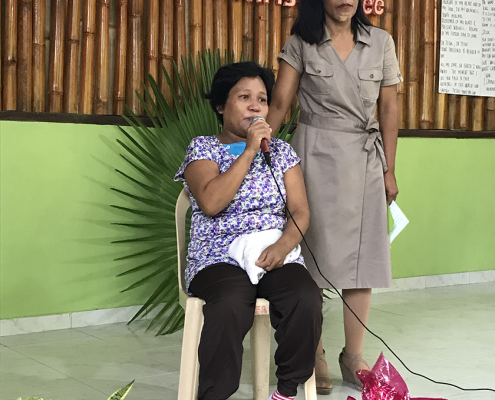 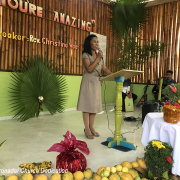 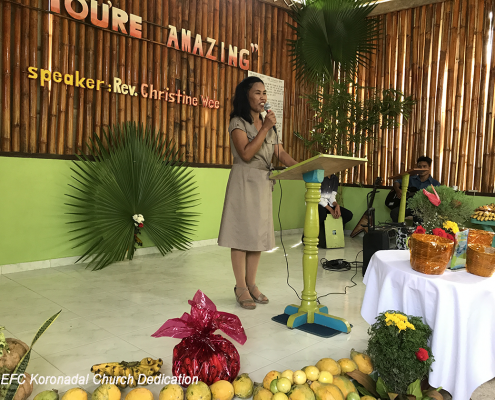 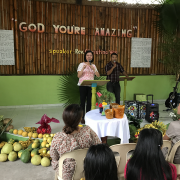 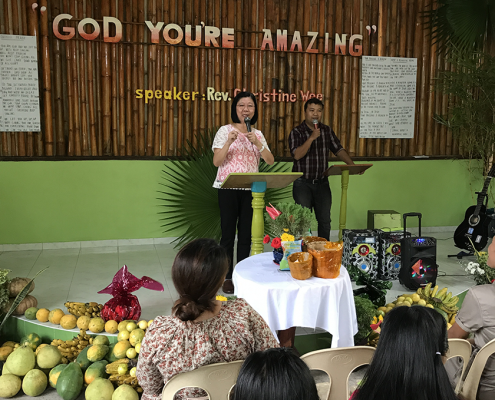 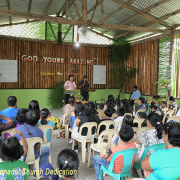 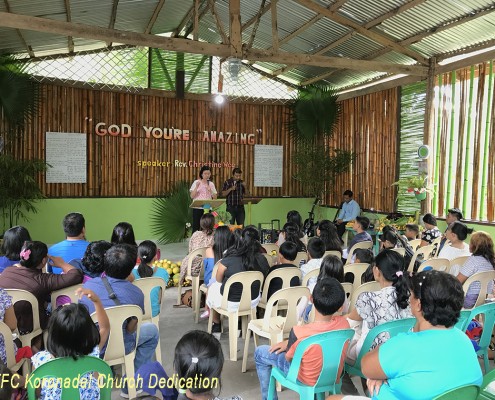 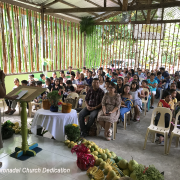 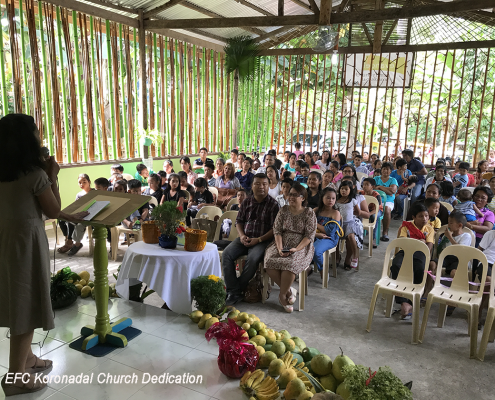 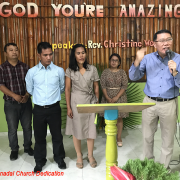 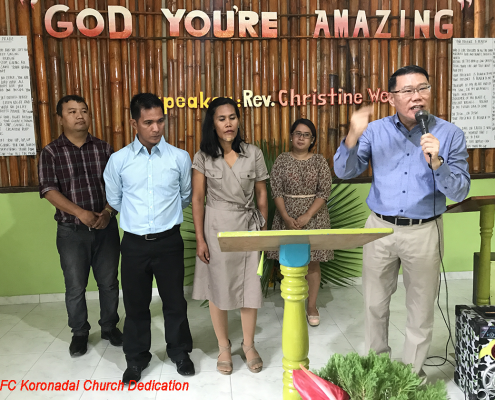 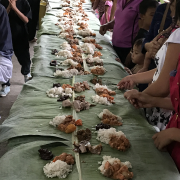 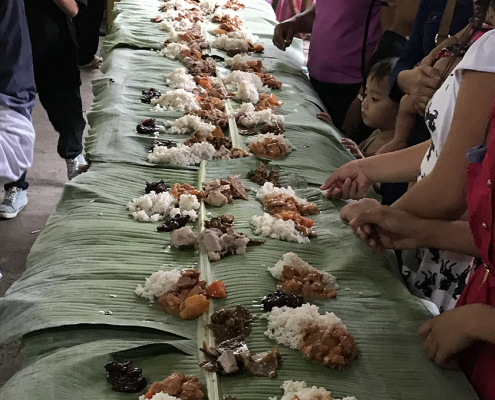 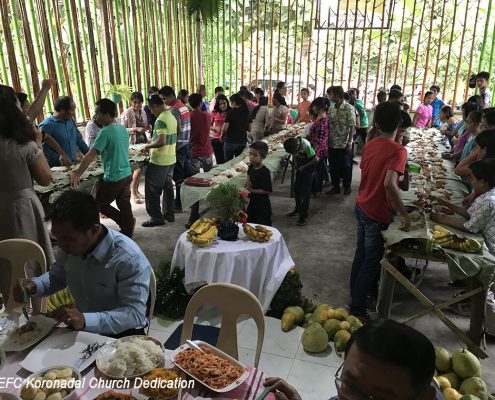 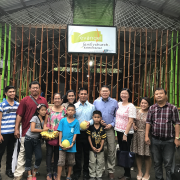 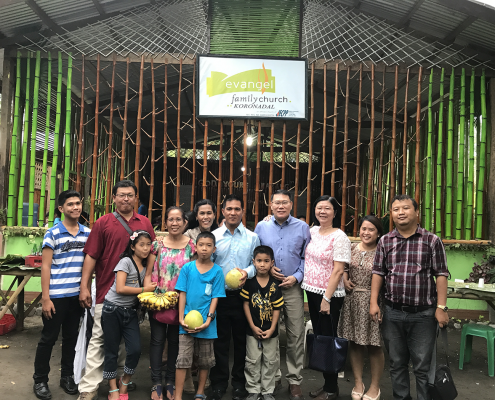