Geography
Bukidnon, a rich tableland, is a landlocked province in Northern Mindanao. It is in the heartland of Mindanao, linking Davao to the south and Misamis Oriental to the north of the island. It occupies the extensive plateau that is bounded on the north and the northeast by Misamis Oriental; on the east by Agusan; on the south and southeast by Davao; and on the southwest and west by Lanao and Cotabato. It lies between the parrallels 7’25’ and 8’38’ north latitude and meridians 124’16’ east longtitude.

Bukidnon is a highland paradise in the heart of Mindanao, and it is home to the world’s biggest pineapple plantation boasting a classic golf course dating back to 1928. It is the biggest cattle-producing province in the region. It is well endowed with natural attractions like the Kitanglad Ranges that includes Dulang Dulang, the second highest peak in the country. And it has been identified as one of the country’s richest in biodiversity and endemic species of flora and fauna.

Topography is predominantly a rolling tableland of grass with an average elevation of 915 meters. Low plains alternating with rolling uplands, deep canyons and valleys characterize the terrain.

Political Subdivision
The province has a total of 464 barangays distributed among 21 municipalities and one component city. Malaybalay is the capital town. The province is grouped into 3 congressional districts.

Language/Dialect
The province has different dialects brought by the immigration of lowlanders that come from the different islands of the archipelago. Cebuano is spoken by 77.9% of the population; Binukid, by 8.9%; and English, by 0.05%.

Climate
Bukidnon is relatively cool and moist throughout the year. There are two prevailing types of climate variations: the northern part has no pronounced maximum rain period, with a short dry season lasting only for one to three months, while the southern part has no pronounced maximum rain period and no dry season. The province is outside the typhoon belt. The mean annual temperature is 24.04°C with maximum and minimum temperature of 29.6°C and 18.5°C, respectively.

Evangel Churches in this Region
JECPP Cagayan de Oro region has planted a total of 6 churches in Bukidnon thus far. One town church is established in Manolo Fortich, and another church in the heart of Malaybalay City with 4 barrio churches under its care in Kubayan, Natid-asan, and towards Valencia City, Agalyan and Lurugan.

Malaybalay City is the provincial capital of Bukidnon. On November 22, 1988 our missionaries, Rev. Eleazar & Rev. Lourdes Ello started their first Worship Service in a house church in Malaybalay City with 1 adult and 6 children. The beginning of the church was very small, but God inspired them with His Words which says, “Do not despise the day of small things.” 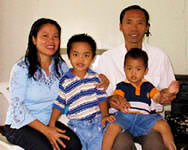 By December 1999, they had their first Thanksgiving Service with 42 adults and 27 children attending. There was such a sense of the goodness and faithfulness of God in their work. They have now transferred to their new place of worship which has a capacity for 70 people, right in the heart of the city. Their recent 5th Thanksgiving Service saw an attendance of 67 adults and 42 children. The church is slowly growing and God has allowed them to start a 2nd service at 6:00 to 8:00 pm.

There are many towns and barrios to be won for the Lord in Bukidnon. With roads now completely paved towards Davao City and Cagayan de Oro City, there is great potential for this region. We look to God and continue to believe in His promise that says, “He who has begun a good work in you will complete it until the day of Jesus Christ.”